Put me down for greatest. To borrow a phrase the kids are using these days, I definitely have a "man crush" on Stephen Colbert. And seeing him in person did nothing to change that view.

When Stephen came out, he did some Q&A with the audience--he said he wanted us to get to know the real Stephen before he had to get into character and "say all these terrible things that I say." I don't know if he meant that the things he says are terrible because he's super-liberal and disagrees with everything TV Stephen says, or if he meant that he says terrible things because he's always mocking and ridiculing people and institutions.

My personal opinion is that Stephen Colbert is much more liberal than the character he plays, but not as liberal as Jon Stewart, partly because few are, but also because it seems he really is a practicing Catholic, as he claims to be on the show (more on this in a minute). The first question he got was "are you a Republican or a Democrat?" and he quickly replied "none of your gosh dang business." (He didn't say gosh dang; he has a bit of a potty mouth--again, more on that coming up.) So that didn't help me figure out if my opinion is right or not.

The "juiciest" tidbit produced by the Q&A was learning that Episode IV Obi-Wan is Stephen's favorite Star Wars character of all time, and he did some Strangers With Candy-style dancing with a woman in the front row, but the rest of the questions were pretty mundane. I had my hand up the whole time, hoping to ask him if he had a Mormon friend, and if not, I'd be happy to pose for the picture, but alas, he didn't call on anybody from our section.

A few minutes later, the taping began. I bought into the "we need you to laugh at everything" directive 100%, because a lot of it was actually funny, I was feeling kind of giddy just from being in the studio, and I know how important the energy of a crowd can be to the success of a comedy show. He made some great jokes about Obama winning a Grammy the previous night, and ran a "tribute" to Mitt Romney's campaign (which had been suspended since his last taping), complete with the Guy Smiley footage he's been using on various Mitt pieces.

I was amazed at how well he did without scripts. I'm assuming he wrote most if not all of the non-interview segments of the show, but he then has to memorize them because there were no scripts on his desk and nothing in the prompter. He messed up a few times, but he quickly composed himself and did those lines over. He never needed a third take.

As was the case for most Colbert episodes during the strike, he filled up most of the time with a series of interviews. His first guest had a cool beard but a relatively boring topic, the second was interviewed over the phone about Stephen's portrait currently on display at the National Portrait Gallery, but the main guest--the one he talked to at his usual interview set--is the one worth going into more detail about.

Dr. Philip Zimbardo is a Stanford professor whose work you're probably familiar with even if you haven't heard of him. He conducted a study in the '70s where volunteers were randomly assigned as "guards" and "prisoners" in a makeshift prison, and within a week the guards were already psychologically abusing the prisoners. He was on the show to promote his book The Lucifer Effect, which, based on his comments, basically seems to promote the idea of rebelling against authority.

Their discussion became somewhat heated, as Stephen seemed to slip out of character (his character talks about religion a lot, but this seemed more personal and real) as he argued the "arrogant" (how Jen Nuckols, a girl in my ward out here who took a class from him at Stanford describes him) Zimbardo's assertions that we should never trust those in authority over us, that God was wrong and Lucifer was right (God having supposedly created a perfect man in Adam and the devil proving he was actually corruptible), and that God shouldn't be trusted because he created hell (Stephen countered by saying hell is when we're separated from God's love, which happens when we disobey him, so we create hell ourselves and send ourselves there--pretty doctrinally accurate!). At one point, as Zimbardo continued to state that "God made a mistake" in the Garden of Eden, Stephen finally agreed that God made a mistake (not true) but that's why he sent his son Jesus Christ to redeem us (definitely true). That exchange, however, was edited out of the actual broadcast (I was pretty sure that all three interviews had gone long and something would have to be left out, but I was hoping it would be part of the beard guy's interview).

The back-and-forth culminated when, after Colbert said that God doesn't send us to hell, we send ourselves to hell, Zimbardo replied, "You learned very well in Sunday School." Stephen then quipped, "I TEACH Sunday School, motha (bleeper)!" I found that a very interesting, unnecessary, and hilarious use of profanity, and I think it would be a great slogan for a new Colbert poster or t-shirt (I wouldn't buy it, of course, but I think it would be a hot seller). I was overall very impressed with the passion and knowledge Stephen exhibited in defending his (and my) beliefs.

The taping ended with Stephen using a large sword (not sure if it was George Washington's or not) to make a sandwich, a reference to the segment about his portrait. Watching him use a sword to spread mustard, chop lettuce and slice tomatoes was hilarious, although it seemed certain he'd cut himself and I'd soon be ponying up the dough for a Fingerstrong bracelet.

And that was my Colbert Report experience. I have tickets to The Daily Show for April 8, and now that the writers' strike is over I'm realizing I did it backwards: as good as Colbert was without scripts, Stewart's show was better during the strike, mainly because he still had his correspondents out doing stuff. But with writers, Colbert's show is the best on TV. If you like satire, or politics, or political figures and events being satirized, you really should be watching both shows, no matter what your personal political leanings are. And that's the truthiness.

Note: After writing everything above but before posting, I started finding stuff online about the Colbert-Zimbardo smackdown, including this. It seems I'm not the only one who enjoyed Stephen's final line, and there's a good chance it WILL end up on a t-shirt very soon!
Posted by jeff at 1:26 PM

Thanks for the link to my blog. The interview definitely made for some great TV.

I'm working with Phil on getting heroism into the public consciousness. The Lucifer Effect is actually about how easy it is for normal people to commit evil acts. The last chapter turns the focus to heroism and how it behaves in the same way - anyone can do it. Zim (and I) see that as the antidote to evil.

I know many men that have "man crushes" on Stephen Colbert. Check out Collin Bennions blog and you will see a pumpkin that he carved that looks just like Stephen, it is pretty great.

Looking back, I probably shouldn't have tried to characterize a book that was discussed for just two minutes or so. But Dr. Zimbardo did seem to relish playing devil's advocate (pun intended) with Stephen.

Best show on after 5 pm Central Time (PTI), and that includes The Office, which has really hit the skids the last season or so. 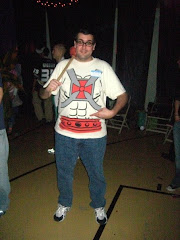 I read what these people write. I wish some would write more.